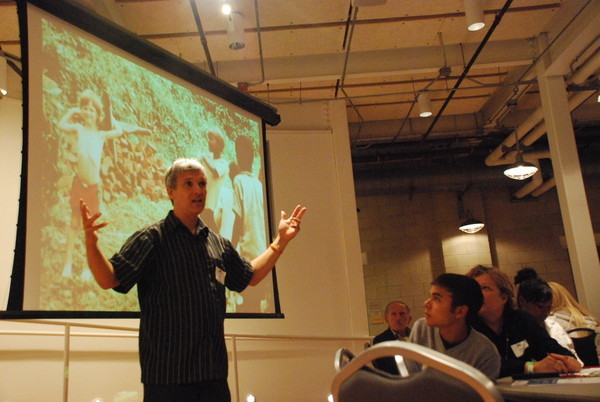 Editor’s note: This is part two of my bullying story. To read part one, click here.

SKOKIE, Ill — Students spoke in hushed tones as they engaged the elderly Holocaust survivors in a serious discussion about their experiences.

Concluding the day of discussions was a high-energy but equally sobering presentation by Carl Wilkens, the former head of Adventist Development and Relief Agency International in Rwanda.

In 1994, he was the only American who chose to remain in the African country after the genocide began. Wilkens spoke about how the ethnic conflict between the Tutsis and Hutus erupted into deadly violence after President Juvénal Habyarimana was killed when his plane was shot down.

Shortly after the reported assassination, Hutu militias started to ransack houses and even attacked foreigners. One of the militia groups was outside of Wilkens’ house when neighbors dispersed the would-be attackers.

“Our neighbors stood up for us,” Wilkens said, emphasizing to the high school students how important it is “to stand up” for friends and classmates who might be perceived as weak or helpless.

“All it took was somebody saying no,” he said.

Unfortunately, not enough people, especially those in power, stood up to say no, and that led to the escalating genocide, Wilkens said.

Habyarimana’s death triggered a 100-day killing spree that led to the death of 800,000 people, according to Human Rights Watch.

Wilkens’ choice to stay in Rwanda and engage with Hutu authorities helped to prevent the massacre of hundreds of children over the course of the genocide.

Wilkens was featured on PBS Frontline‘s Ghosts of Rwanda and the documentary The Few Who Stayed: Defying Genocide.

His humanitarian work has been recognized with several awards, including the 2005 Medal of Valor from the Simon Wiesenthal Center.

Now, Wilkens and his wife run World Outside My Shoes, a nonprofit educational and professional development organization promoting peace in Africa.

Of primary concern to the Wilkens family is the looming political conflict in Sudan, which could culminate in a peaceful election for independence on Jan. 9 or a war between the ruling north and the restive south.

Wilkens is urging the students to practice what they have learned during the conference, and “stand up” for the people of Sudan by urging President Barack Obama to push for “robust diplomacy” in the region.

Wilkens said if enough people stand up and urge Obama to put political and diplomatic pressure on Sudan, another genocide might be prevented. He also asked the students to call 800-GENOCIDE and sign a statement of support online at http://www.standnow.org.

The leadership conference was just one of the many events sponsored by the Illinois Holocaust Museum & Education Center at 9603 Woods Dr. in Skokie.

According to a statement, the museum is presenting the program “as a way to increase awareness and knowledge of the Holocaust and genocide and to challenge students to think about lessons society can learn from past injustices.”

With survivors already in their 70s to 90s, with a very few centenarians, the museum is “likely the last” institution of its kind to be built with the active participation of Holocaust survivors.

The museum is the largest facility in the Midwest dedicated “to preserving the memories of those lost in the Holocaust,” which undertaken by Germany’s Nazi regime until the end of World War II, and to teach the younger generations “to fight hatred, indifference and genocide in today’s world.”

Error: Twitter did not respond. Please wait a few minutes and refresh this page.