SKOKIE, Ill — Long before the mass extermination of Jews at the Auschwitz and Birkenau concentration camps in the early 1940s, the quest for racial superiority in Germany had already been set in motion.

Science and medicine were manipulated to justify discrimination, persecution and murder by the Nazis.

As Adolf Hitler’s deputy Rudolf Hess declared, “Nazism is applied biology.” He and others considered those deemed mentally and physically inferior should be sterilized or even targeted for “mercy killing.”

At the Illinois Holocaust Museum and Education Center, these and other horrors of Nazism and misguided science are on display at a special exhibition, “Deadly Medicine: Creating the Master Race.” 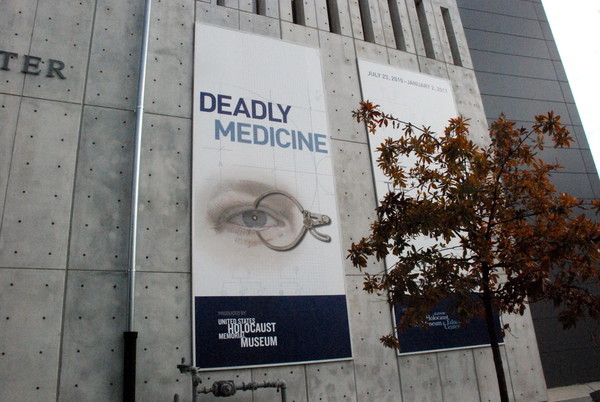 The traveling exhibit, whose Skokie run ends Jan. 2, might be too gloomy an experience for the holiday season, but The New York Times noted that it “should be a part of every citizen’s experience.”  ﻿﻿

“One of the things that I think this exfhibit accomplishes is to really start to understand how the Nazis sold some of these ideas to the public,” said Rachel Hellenga, director of program services at the museum, 9603 Woods Dr.

Hellenga said the policies began as “somewhat well-intentioned” scientific and medical research aimed at the “Utopian ideas of perfecting [the] human race” that rapidly devolved into something more sinister.

“It wasn’t as if one day, Hitler came in and completely changed everyone’s attitude,” she added.

The exhibition methodically shows how Nazism influenced the German society and dominated it overtime.

One of the early “scientific” policies the Nazis implemented in support of their goal of “perfecting the Aryan race” was sterilization. An estimated 400,000 non-Jewish Germans of child-bearing age were sterilized to prevent them from reproducing, as they were deemed﻿ mentally or physically challenged.

Children and infants with physical and mental defects were not spared by pediatricians. Powerful sedative drugs were administered in “pediatric wards” to kill them.

It did not stop there. Mentally challenged adults were poisoned using the dreaded “shower stalls” that were filled with carbon monoxide emissions.  This would become a model for the death camps.

The exhibit’s eerie reproductions of the “pediatric wards” and “shower stalls” complete with white tiles and other medical equipment convey a very sobering and hair-raising picture.

The so-called eugenics scientific theory originated from turn-of-the-century beliefs that asserted Charles Darwin’s “survival of the fittest” theory could be applied to humans. 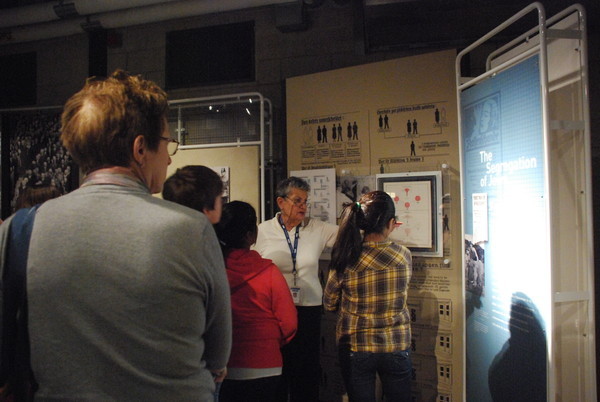 Supporters of that scientific thought, particularly in Germany, believed by controlling marriage and reproduction a nation’s genetic health could be improved.﻿

“At the same time it touches on complex ethical issues we face today, such as how societies acquire and use scientific knowledge and how they balance the rights of the individual with the needs of the larger community,” she wrote.

Nazism was based on the belief–pushed by Hitler–that inferior races and individuals had to be eliminated from German society so that the fittest Aryans could thrive. The belief rapidly devolved into the elimination of the Jews.  ﻿

By the end of the World War II, an estimated 6 million Jews had been killed in the scattered camps established by the Nazis. ﻿

The Holocaust center was inaugurated by former President Bill Clinton in 2009. It is the largest facility in the Midwest dedicated to preserving the history of the Holocaust.