Text and video by Ted Regencia


CHICAGO — In what is seen as a victory for the gay rights movement, Gov. Pat Quinn signed today, January 31, a landmark legislation that recognizes same-sex unions in Illinois.

Quinn signed the Illinois Religious Freedom Protection and Civil Union Act before an excited crowd at the Chicago Cultural Center.

“Today is an important day in the history of our state because today we are showing the world that the people of Illinois believe in equality for all,” said Governor Quinn.

On Dec. 1, the state Senate approved the measure. The General Assembly passed the bill in narrow votes: The House count was 61-52 and the Senate tally was 32-24.

While the law is not recognized by the federal government, it puts same-sex couples in Illinois on similar legal footing as straight couples. The legislation gives partners the right to hospital visitation and insurance coverage. It also gives the partner the right to dispose of property in case of incapacity or death.

At the same time, it gives protection to religious institutions to define marriage.

The Catholic church, which has opposed same-sex unions, is not legally compelled to perform ceremonies to recognize such relationships.

“No ideology can erase from the human spirit the certainty that marriage exists solely between a man and a woman,” the Catholic Conference of Illinois said. 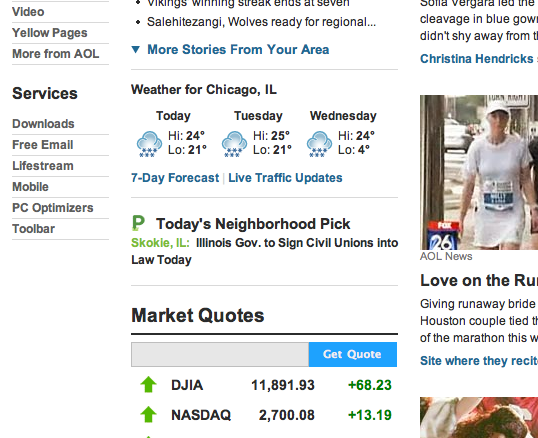 Featured in the main page of AOL.com

Cardinal Francis George of the Chicago Archdiocese said, “No one has the right to change the nature of marriage.”

“The public understanding of marriage will be negatively affected by passage of a bill that ignores the natural fact that sexual complementarity is at the core of marriage,” he noted.

For Francis Britanico, who is from Iloilo, and Robert Montecalma, who is from Manila, the bill’s signing means they no longer will have to worry about issues such as medical decisions and insurance benefits. The two nurses have been together for four years and residence in Skokie.

Britanico said compared to a church recognition, the legislation “is very much more important to us in terms of our health care decisions.”

Still, Britanico said he and his partner don’t have “anything against” the church. They are both Catholic and regularly attend Sunday service at St. Peter’s Catholic Church in Skokie.

“We strongly believe that there’s a big separation between the state and the church,” he said. “The church, we don’t have anything against it because they have their own doctrines to follow.”

Added Montecalma: “We’re still Christians, we’re still Catholics, we still go to the church. Even though some of them don’t accept gay couples, they have their own opinion. We have our own stand: that we need to fight for our rights.”

While Britanico and Montecalma jumped for joy with others when the legislation passed, they are not rushing to the Skokie courthouse to get a license.

“We need to prepare everything to make it a special moment for both of us,” Montecalma said, adding that he wants “a big civil union” with family and friends present.

The new law, scheduled to take effect in June, would allow anyone 18 and older to apply for a license. Provisions disqualify applicants who are related and those in an existing marriage or civil union from obtaining legal standing.

The law is not recognized by the federal government. The Defense of Marriage Act prohibits gay couples from receiving benefits, like tax breaks and immigration rights of foreign partners.

Bobby Samson, who is from Dipolog City, has been with Gregg Herman, an architect and former Navy officer, for four years.

The welcomed the law, while saying they are  realistic about the slow pace of change in the federal level.

“It’s a big step in tolerance, I think. But  I think for a lot of people it’s not big of a deal because we have been without it for so long. We sort of made do without it,” Herman said. “All the states have to go through it first before the federal government starts to take it up as an issue.”