Amid the chattering of teens flocking out after their final exams, Wileen Hsing said “hello” in Chinese to one of her students as she marched down a hallway at Niles West High School.

If not for her horned-rimmed eyeglasses and teacher’s identification card, the 38-year-old Hsing could easily be mistaken as a college graduate.

In reality, the Flossmoor, IL, native has been an instructor at the school for 10 years. By virtue of her lineage and Chinese proficiency, the former English teacher has since 2008 undertaken the challenge of teaching the complicated foreign language to District 219 high school students.

“There was a lot of interest from the community. Several parents were interested in starting a Chinese program,” Hsing said in explaining the genesis. She added that interest was further heightened when other school districts started programs.

China in the news

The Chinese language, and the growing calls for more Americans to learn it, has been spotlighted over the past few days, especially when Mayor Richard Daley welcomed Chinese President Hu Jintao to Chicago.

During Hu’s visit, Daley touted Chicago Public Schools’ long-running Chinese language program at the Confucius Institute. The mayor said proficiency in Chinese was key to more economic opportunities for Americans in the most populous country in the world.

According to the World Bank, China has a population of about 1.3 billion people.

“I’m convinced that the economic future of Chicago and other cities depends on our willingness to seek opportunities all around the world and especially in Asia, and in recent years we have focused a great deal of effort on developing an economic relationship with China,” Daley said in a pool report sent to Skokie Patch.

“Our long-range goal is to make Chicago the most ‘China Friendly’ city in the United States and to establish it as China’s ‘Gateway to America,’ ” he added.

“I think people coming to the United States knowing Chinese or Japanese or any foreign language gives us an institutional advantage,” he said in urging that students should learn about the world “beyond our borders.”

“The world is getting smaller. We’re cultivating trading relationships with other people,” said Van Dusen.

The Skokie mayor added that he did not view Americans talking in a different languages as a “division” but rather “a strength for the future of our country.”

At Niles West and Niles North high schools, 160 to 170 students are enrolled in the Chinese courses, according to Hsing, who developed the curriculum for both schools, and commutes between the two to teach.

When the program started three years ago, 120 students had signed up, Hsing said. She went from being an English and literature major at University of Illinois to a Chinese language instructor.

While many of the students are Asians who seek to be “more connected to their own identity,” others take Chinese as an elective for more practical reasons, Hsing said.

“There are a lot of kids who take it because they think it’s good for them–eventually in the future for business,” Hsing explained. One student took the class “because everyone told her it was too hard, so she wanted to take it,” she said.

Hsing, who grew up speaking Mandarin at home, said English-speaking students could find it challenging to learn the language.

The pronunciations and writing make it hard for people who are accustomed to the Roman alphabet, she said, citing studies that found it took four times long to master Chinese compared to other languages such as Spanish or French. For college students have “concentrated” studies and invested learning, they could be fluent in three to four years, the teacher added.

Hsing conceded the program did not offer enough time to make Niles West and Niles North students fluent in Chinese but did note, “They will have a very good head start than if they waited until college.”

NPR also reported that college students taking Chinese “more than doubled” between 1998 and 2009, when it reached 60,976 students. Still that lags behind students taking Spanish (864,986) or French or German.

In contrast, more than 300 million students are studying English in China–nearly equal to the entire U.S. population, according to a special report by ABC’s Diane Sawyer. 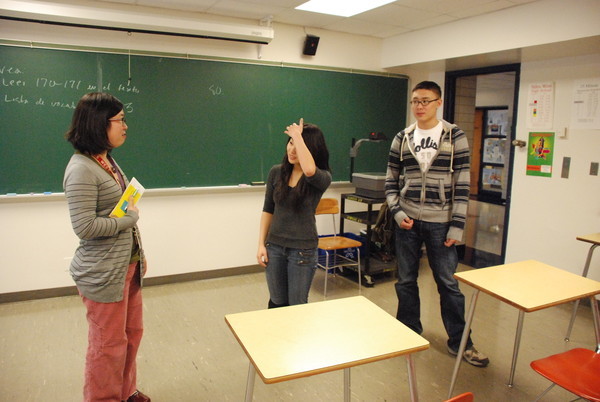 Niles West senior Dabin Chen described himself as “very excited” after he learned about the program. He added that his parents encouraged him to keep in touch with his heritage and culture.

The 18-year-old student, who was born in Guangdong Province in China, speaks the Cantonese dialect and appreciates not being forced to learn the language. He said while a student may not be fluent in a foreign language, “it’s neat” to learn a few phrases and use them to connect with other students from different backgrounds.

According to its bylaws, Xilin teaches “school-age children after their regular school hours the Chinese language and Chinese culture, and to enhance students’ academic competitiveness and social skills.”

Another Skokie school offering classes is at the Chinese Cultural and Educational Association at 8141 Kedvale Ave.

To enhance her students’ understanding of the language and culture, Hsing says she is taking 16 teenagers from Niles West and Niles North to China at the end of the school year in June. The 11-day trip will expose participants to the language as well as the sights and sounds of Asian nation.

“I think if the Chinese people see Americans learning Chinese, I think it makes them that much more open, because it shows that the other side is making an effort,” Hsing said in echoing Chen’s sentiment.

It establishes “human connection” to other people, she noted.