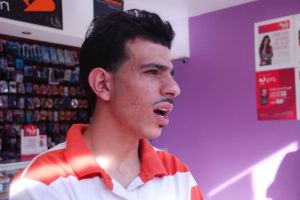 NEW YORK — “Papa, take me with you,” Abu Hamad recalled his five-year-old son pleading with him on the phone from Sana’a last Oct. 10. The Hunts Point shopkeeper’s half smile could not hide the worry in his dark round eyes. His three young children and wife are still living in the capital of Yemen, he said. And not even his American citizenship could help them out of the mountain city that is reeling from an increasingly violent civil uprising.

On Sept. 24, Ali Abdullah Saleh, Yemen’s president for the past 33 years, returned to his homeland after a brief medical exile in neighboring Saudi Arabia. He was forced out of the country after an assassination attempt. The departure raised hopes for reform in the Arabian Peninsula nation of 24 million people. But his abrupt return has sparked fresh violence, which has already claimed close to 2,500 causalities since February. On Oct. 16, 18 more people were killed and 30 others were wounded in clashes between Saleh’s troops and his rivals, according to news reports from the region. (With reporting from Mahmoud Sabbagh)