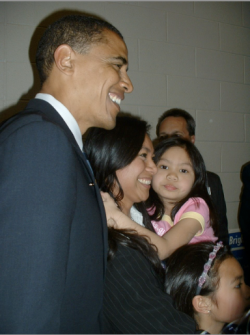 CHICAGO — Discounting not a single vote in his historic bid for a seat in the United States Senate, State Senator Barack Obama reached out to the Filipino-American community in Illinois, and extended to them his “message of hope.”

In an exclusive telephone interview with this reporter, Obama highlighted his progressive immigration policy, which seeks to give a “path to citizenship” to long-time undocumented residents. This, provided that they “obeyed the laws of the United States and paid the proper taxes.”

“Obviously after 9/11, there were changes that we had to impose to secure our borders. At the same time, we have to recognize that the United States is a country of immigrants. The continuing influx of new immigrants, the new energy and ideas that they bring, that’s what makes this country even more dynamic,” Obama said.
Obama said that he also wants to “speed up the immigration process”, allowing families who are now based in the U.S. to bring their loved ones here.

Liberal ideas
While acknowledging that many Filipino-American voters do not agree with his liberal views on social issues such as abortion and gay marriage, Obama pointed out that many of the issues that he is fighting for could directly benefit them and their children.

“I always believe that labels don’t mean a lot to most people. You just have to show to them that they can trust you to fight for the things that they care about such as the delivery of healthcare, good education for their children, and creation of jobs,” he said.

“Ultimately, what the average guy on the street cares about is, how to pay the bills, save for his kid’s college education. That’s what really matters to voters,” Obama added.

“I also believe that people should be rewarded for their hard work and I know that Filipinos are hard-working people,” he said, noting that he personally knows of a Filipina who once served as a nanny to a relative.

As a young man who grew up in Hawaii, Obama also said he had good memories of his encounters with many Filipinos there.

Veterans issue
On the veterans issue, Obama admitted that he is “not familiar” with the events that led to the Recission Act of 1946, which stripped Filipino World War II veterans of their full benefits as active US servicemen.

“But this I can say: Any man or woman who serve his or her country must be properly honored and cared,” he stated.

As a Commonwealth nation from 1934 to 1946, the Philippines’ Armed Forces were under the jurisdiction of the United States. It was then US President Franklin Roosevelt who ordered the Filipino soldiers to fight, alongside Americans, the invading Japanese forces.

Face-off with Keyes
Obama will face off with his Republican opponent Alan Keyes in the November 2, 2004 election. Many polls suggest he will win by a large margin.
Obama, a law graduate of Harvard University and the first African-American president of the Harvard Law Review, rose to national prominence after delivering a speech July 27 at the Democratic National Convention in Boston.

“It was a great honor to be able to speak to the nation. I am very flattered,” Obama said of his moment at the podium.

Of his natural charm, Obama attributed his multi-ethnic background as a great influence for his ability to embrace different cultures and respect people.

Obama also related how he first became a community organizer in the Southside of Chicago, a civil rights lawyer and coordinator of Project Vote, which helped elect President Bill Clinton in 1992, and his experience as a state senator.

Even before his election to the US Senate, people across the US and more especially the media, are already talking about his presidential prospects. They suggest that he could be the first African-American to become president of the US.

But Barack Obama only has this to say: “It is not something I take seriously. At this point, I am working to win this Senate contest and serve all the people of the State of Illinois.”